Battle for the Hill Wiki
Register
Don't have an account?
Sign In
Advertisement
in: Mechanics, United States Government

President of the United States

View source
watch 01:40
The Sandman Will Keep You Awake - The Loop
Do you like this video?
Play Sound 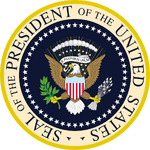 In contemporary times, the President is looked upon as one of the world's most powerful political figures and as the leader of the only remaining global superpower. The role includes responsibility for the world's most expensive military that has the second largest nuclear arsenal. The President also leads the nation with the largest economy by nominal GDP. The President possesses significant domestic and international hard and soft power.

The feature was implemented on November 3rd, for the Open Alpha alongside the Vice President.

In order to run for primaries, you must have 20% National Reputation.

The most terms served as President is held conjoinly by 1st and 5th President Patrick Higgins, and 7th and 9th President Skyler Mizuki, who both served 4 terms. Higgins server longer at 167 days, compared to Mizuki's 52 days. Patrick Higgins also holds the record for most Vice Presidents with 3 different ones: Melody Grant, Kyrstin Sinema, and Jane Goodall.

Community content is available under CC-BY-SA unless otherwise noted.
Advertisement