Battle for the Hill Wiki
Register
Don't have an account?
Sign In
Advertisement
in: United States Government

Vice President of the United States

View source
watch 01:36
We're Getting Mutants in the MCU - The Loop
Do you like this video?
Play Sound 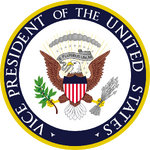 There have been 19 Vice Presidents in total: including 12 Democrats, 5 Republicans, and 2 Greens.

The oldest former-playing Vice President as of August 7, 2022, is Jane Goodall. There are only 5 other former VPs who are still playing.

Community content is available under CC-BY-SA unless otherwise noted.
Advertisement